One autumn morning last year, a quiet, middle-aged clinical professor came to see me because he found his gym workout was badly irritating his elbow and ankle.

I went over my 4 Keys (see my book) healthy living questions to which he scored green in food/ water/ supplements and fitness. He scored amber in lifestyle – he was working a little too much. Family life had been fraught with problems until recently, and on the whole, he loved his work. He just couldn’t quite get his life/ work balance right. His mind was amber and at times red, as he found teaching at university stressful, and he also found it difficult to switch off. I intuitively sensed some deeper issues, and it made sense that keeping fit calmed his mind.

This made me decide to explore his physical body for chronic [neuropathic] pain and to explore the deeper spinal muscles and relevant joints and ligaments. It seemed wise to leave the alternative discipline of shamanic reiki till later. This aspect of healing needs a deeper level of understanding and trust between practitioner and patient.

I could feel that his lower back was tighter on one side This could have been disc irritation, or it could have been his biomechanics; the way he sits and walks, and either a fixed or habitual posture. Telltale signs of collagen lines at the base of his neck and back suggested a thinning of the underlying discs. His buttock was acutely tender. His hamstring was slightly more tense, with sensitivity being increased again over the division of the sciatic nerve at the back of the knee, tight bands in his calf muscles, and a moving tenderness where his ankle flexors wove around his ankle.

This was all pointing to neuropathic changes to his L5 nerve root at the base of his spine. That means the sensitivity of the nerve root due to poor posture or ageing disc, as well as mild peripheral nerve changes, causing small contractures down the limb and his ache.

This type of problem is insidious, and is often a normal part of ageing-related to postural issues, causing disc narrowing, called spondylosis, and subtle changes to nerves, from very mild to severe neuropathy.

The symptoms can be anything from mild stiffness to pins and needles, numbness and various degrees of sharp burning and aching pains, often made worse on exercising.

Edwin needed a combination of treatments and skills to help resolve his problems. Over two treatments I gave him GunnIMS to relieve the deep-seated muscle problems at the base of his neck and back, plus acupuncture, laser, joint mobilisations and deep oscillation. I also used NLP and subtle mind mapping to get his head in the right place.

Ideally, I would have gone on to add shamanic reiki to heal issues in his auric body, balance his chakras, and use key acupuncture points in his fascial plane. However, after two treatments he was physically pain-free and elected to get on with his life.

The Shamanic Art of Healing the Soul 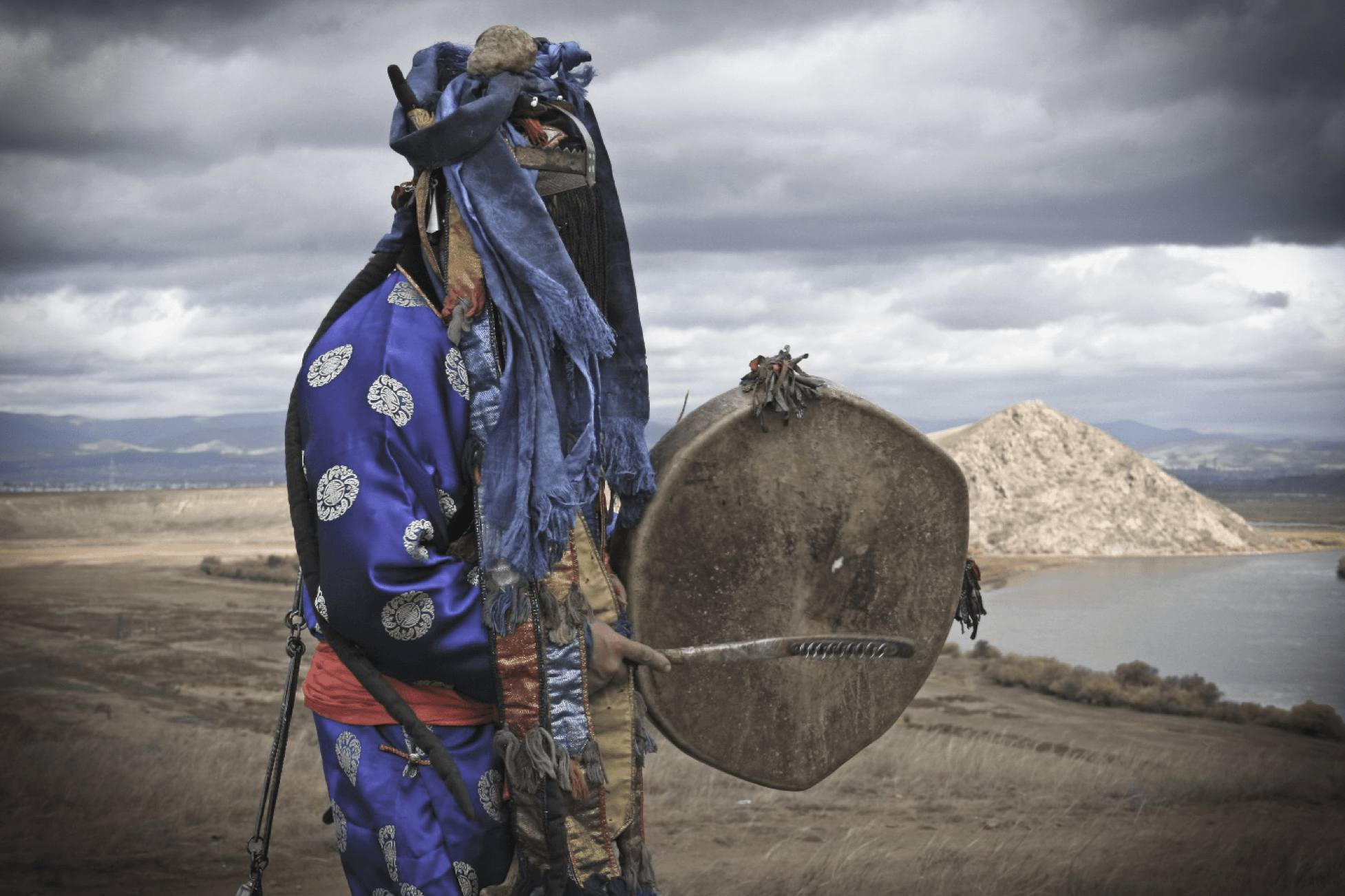 The Siberian definition of the word shaman is “someone who sees in the dark with his or her heart.” This is a loving expression of service. The shaman is dedicated to the cause of helping alleviate suffering in the world.

We have doctors, nurses and physiotherapists who specialize in everything imaginable except for the soul in our Western culture. To me, this care of the soul is the missing link in healing and must be cared for first. Fortunately, this ageless medicine is just beginning to be understood in our Western culture. More and more people are seeking healers not mechanics. Shamanism is an ancient healing art, dating back at least 40,000 years and was used by most indigenous cultures in the world.

The Shamanic belief is that a human being is first and foremost a soul having a human experience, not the other way around. The belief is, if the soul is cared for properly, or after trauma is healed through the process of soul retrieval, other healings can then manifest in the mental, emotional, and physical bodies of that patient.

I find time and again when a physical problem such as back pain will not resolve there is a deeper soul issue.

Shamanic Reiki is a gentle healing method which emphasizes that all experiences affect your soul and that all healing comes through the soul. It combines the best of gentle westernised Reiki with shamanic teachings. In shamanic cultures, the care of the soul is the most important aspect of healing. People need to be genuinely loved, worthy and connected to a higher power. Once trauma and abuse occurs the soul needs to be cradled.

This healing concept considers that all things are energy. In a typical healing, the shaman moves out destructive energy and replaces with healing divine energy. The theory behind soul retrieval is that there is soul loss when an individual experiences powerful or traumatic situations. Through some sort of trauma, a person loses part of himself as a survival mechanism to withstand the emotion and pain. In shamanic terms, this process is called “soul loss.” In modern psychology, it is called “disassociation.” Psychology does not ask where the lost part goes and how you get it back. Soul retrieval is an ancient energy treatment that finds the lost pieces and puts them back into place, through the heart and head, thereby restoring the soul.

After treatment, you regain more energy and rekindle vital qualities such as, feeling loved and valued, important and needed. You become more vibrant and feel whole again. Converting illness to wellness is like finding the missing part of a jigsaw and putting it back in the right place.

Both modern and soul medicine is a wonderful combination.

If you are interested in experiencing this approach call the clinic. 01889881488

REIKI,as a reiki master myself, the concept of REIKI is very dear to me.Especially tonight, because tomorrow I attend the funeral of the closest soul I have ever had the privilege of knowing and befriending and studying under.My book the 4 keys to health is dedicated to her memory, and she held it just weeks before her death.
First, I will look at a brief history. Reiki, simply put, means universal life
force energy, and it is a lovely touch healing technique. It is thought to
connect to the work put together by a Japanese theology lecturer, called
Mikao Usui, in the late 1800s, and he was also a high school principal and
Christian minister. Asked to undertake a ten year study of the healing work
of Jesus and Buddha, as well as the esoteric teachings of India, he started by
exploring the life of Buddha. Born 620 B.C.E. on the Napal-Indian border,
Buddha was born to a king and escaped his closeted upbringing in order to
relieve pain and suffering. A lifestyle of non-attachment healing, and loving
to material and living creatures on earth was taught, and it is here that we
find the earliest records of reiki.
I’d like to talk a bit here about Jesus, who was known to be a great physician.
When Jesus was two years old (and when Herod was killing boy children),
there were three wise men who came into his life, and these were said to be
Buddhists. Now, here is the controversial bit: scripts have been found saying
that these wise men took Jesus and his family to Egypt and India. There was
a mystical order on the Dead Sea where the Dead Sea Scrolls were said to be
found. In 30 C.E., Jesus returns to Jerusalem where he escapes crucifixion
(another teaching that is in direct conflict with Christian religions), and
then he returns to India for 16 years, living be 120 years old. This is a much
nicer ending than the one I was taught! Having gone to a Christian Churchof England school and knowing the family Bible inside out, I find these
ideas fascinating.
The records are a little sketchy but Mikao Usui was believed to have
conducted a seven year project in the USA, where he read Sanskrit Indian
and Tibetian scripts, possibly at the University in Chicago. On his return
to Japan, he went to a Zen monastery, and when he died in 1926, he passed
his closest controversial teachings and healings onto Chujiro Hayashi, who
died in 1940. Before Hayashi died, however, he passed on the teachings
to his wife, Chie Hayashi, as well as H. Takari, and there are records of
their teachings in Alaska, Tokyo, and Hawaii. They taught fifty reiki masters
between them, and so the lineage continues.
Modern courses have simplified the teachings to churn out reiki masters
of little knowledge, compared to the early masters who dedicated their
entire lives to it. Three key signs are used in the modern interpretation
of reiki: Cho-Ku-Rei, meaning God is here, Sei-He-Kei, meaning key to
the universe/man and God becoming one, and Hon-Sha-Ze-Sho-Nen,
meaning the Buddha in me reaches out to the Buddha in you to promote
enlightenment and peace.
I have studied anthropology, psychic phenomena, and ancient healing
techniques for over thirty years as an aside from my day job, and my dear
tutors – whom I still sit with at least once every three weeks – are all in their
eighties. Before I arrive, they always create a sacred space, with candles lit
and incense wafting as the door opens. The peace always feels like a big loving
hug embracing you as you slip off your shoes and enter their space. Reiki
work, practised in this place and with these wise souls, can make magical
changes to the way someone lives their life, standing apart from religious
labels. It has always been an honour to love these dear friends, and their
words often echo in my head: “focus Nicky, listen and concentrate, such an
undisciplined child in this art, but showing signs of finally maturing!”June
thankyou and Godbless.